Invenio metal detector a new device from Nokta Detectors with un-preceded patented technology that scan ground layers and display real shape and size and depth of detected targets on its screen.

Invenio is the newest and all-new metal and gold detector

that will revolutionize the world of precious metal detection

and relics thanks to its new patented search technology.

The principle of this technology depends on a special search disk

buried target for such as iron nail, box or coin …

In recent years, significant progress has been made in the field

of metal detector technology in terms of design and features.

but these features have not been able to meet the expectations

of treasure hunters and gold prospectors.

For example, gold prospectors want the device to include features

such as: Know the type of metal target discovered before digging

also need to  know the depth of real targets, and know the shape

Invenio metal detector developed in response to these expectations after many years of tests and research.

then displaying a real shape of targets on screen as 3D graphics.

The search coil, which is equipped with special electrical coils, transfers the power generated

by the battery in the main control unit, resulting in a large-scale electromagnetic field

When an electromagnetic field collides with a buried metal object such as an old coin,

a metal statue or a large box, the field signal is echoed in the form of another inverted electromagnetic field,

which is received by a receiver coil within the search coil.

and after the digital processing The data is transmitted wirelessly to the display unit, which has a coloured display

about the targets in the scanned area , so that the location information and the exact shape drawing depend

on the tracking data The tracking unit integrated position IPTU and that transmits data wirelessly also to the screen unit. 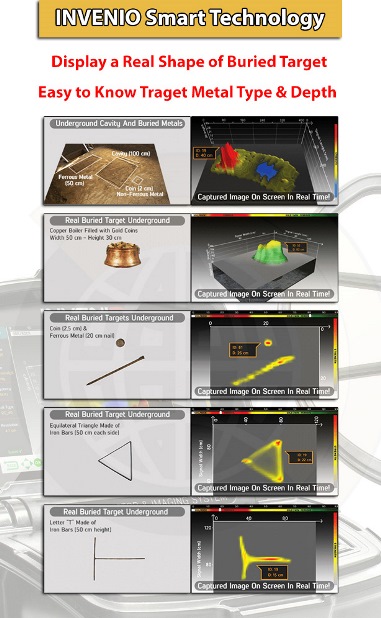 where the sensors record the coordinates of the coil and its height from the ground, which means recording

and tracking all movements of the coil (left – right or front to back ..) accurately represent these movements

directly on the unit that includes the screen visually , giving an accurate idea about coil movement within the search area.

, contributes in knowing the positions of the buried metallic objects as well as determining the length and width of the scan area

as well as the precise shape and distance of targets and the depth accurately.

underground spaces and cavity, so the Invenio metal detector is a versatile device that can

be used for a wide range of metal detection applications in the real life. 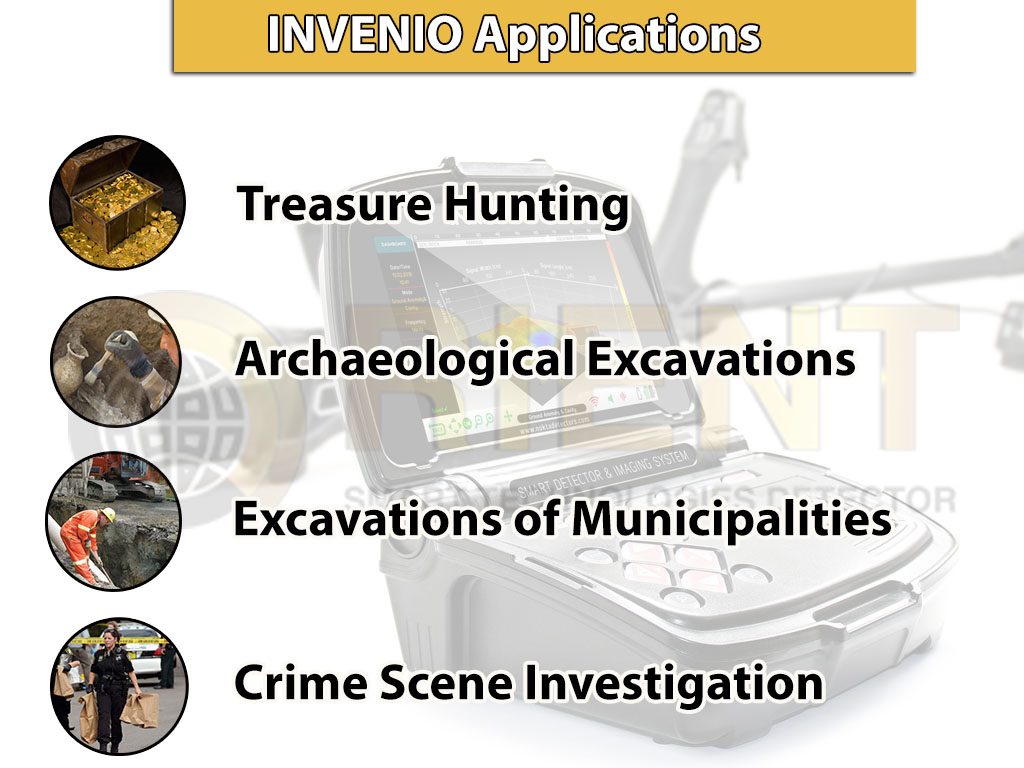 Here is a simple overview of some of the most important applications and uses of the device:

– Detecting gold and objects made of gold such as coins, old relics and ornaments such as rings and bracelets

– Prospecting for raw natural gold, which is found in shallow depths in the form of nuggets and small grains or veins in the ground.

– Detection of cavities and underground spaces such as tunnels, tombs, basements and so on.

– It can be used in municipal works such as detection of sewage pipes, telephone lines and water extensions (pipes)

The following is a review of all search modes according to the previous two categories:

For this search mode, the search coil must be moved with a scrolling motion above the search area

in order to capture the buried metal targets.

In the case of walking the coil without moving it,

no sound or response will occur even if the coil is directly above the target.

Uses: It is preferable to use dynamic search modes to search for relatively small metal targets

such as small coins of gold or silver, rings and small ornaments, at small depths.

Here, in this search mode, there is no need to move the search disk to capture buried metal targets.

The user can walk the coil without moving it, but the disc discovers any metal object underneath.

The closer the coil is to the target, the higher the sound response.

Uses: These search modes are recommended for detection of relatively large metal targets,

such as huge metal statues, spaces and underground tunnels, and also it gives greater depth

in comparison with dynamic search modes.

When using one of the previous search modes and after performing the scan procedure,

the type of metal based on its color.

and thus, the user can know the metal type according to the color, so if the color is yellow

and the coil unit (coil and shafts and IPTU) done wirelessly via Wi-Fi technology.

In addition, users who do not prefer wired headsets can purchase optional 2.4 GHz wireless headphones

Invenio features a vibration feature. when activated, the device will vibrate when a metallic target detected.

It is an essential feature for hearing for impaired users when searching in high noise areas where there are many noise sounds.

then transfer it to his computer for better preview and more detailed analysis.

Front LED and back light of the screen

The Invenio Metal Detector has a front LED lamp to search in the dark,

and the screen has a back light to see the results of the scan even in the dark.

We feed on technology, breath innovation and exist for our customers.
Attention to detail is paramount but we also see the bigger picture.
We are ambitious but humble.
We strive for perfection but we are human… so we may make mistakes as well.
We acknowledge our mistakes and make up for them.
We don’t stick to our guns; we listen to our customers.
We are a sincere and honest family.

We are Nokta Makro Detectors!