How a Metal Detector Works ?

How a metal detector works?

This question is most asked questions by newbie prospectors or even professionals.

Despite most people don’t care about how a metal detector works , but knowing this

may be useful to get best results from purchased metal detectors.

Here in this article we will talk in detail about principle of metal detector work.

Plus what is the components and parts or tools needed to detect metal underground.

is rather complex and we will not go into too much technical details that does not concern the non-expert reader.

we will not go in detail for other types of metal detectors like 3D Ground Scanners or Long range locator devices.

Any metal detector such as GPX 5000 , Kruzer has four key components or parts that includes :

1 – Stabilizer :  This is the part of the metal detector that makes it comfortable to use.

think of it as the armrest of the device. It stabilizes the metal detector as you move it around.

2 – Control Box :  The control box is the brains of the device.

It contains the battery, device controls and settings buttons , the microprocessor, display, and speakers.

3 – Shaft :  This is the main part of the detector that all of the other parts connect to.

It’s normally with adjustable length for the user’s comfort. during search.

4 – Search Coil :  This is the bottom part of the detector that you swing over the ground.

object that is buried underground. 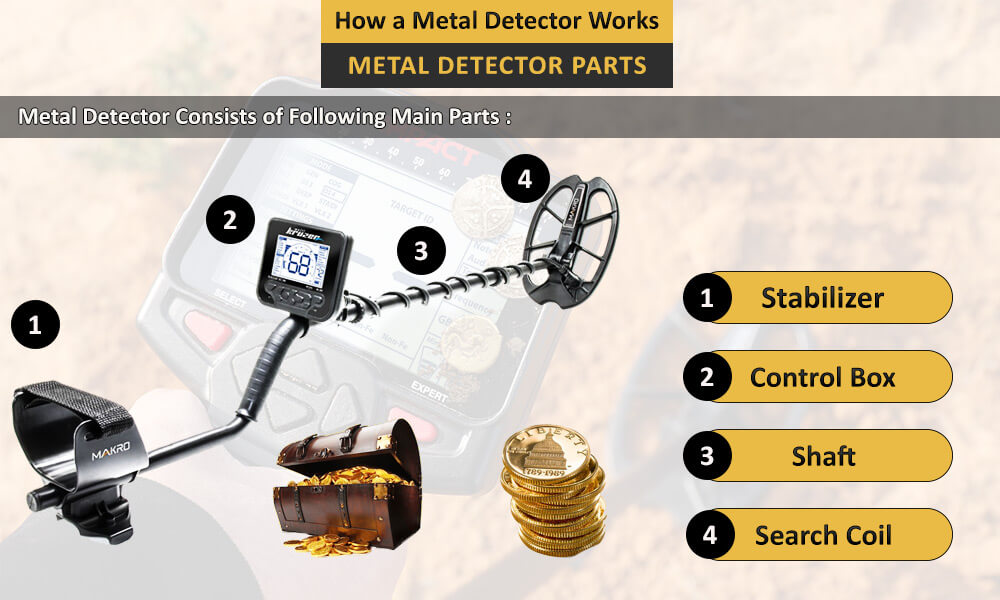 Principle of Work : While metal detectors can be complex, the principle behind their function is fairly simple

There are two main search technologies used in typical metal detector device including :

One acts as a transmitter, and the other acts as a receiver.

The first one transmits a magnetic field that result by electricity that moves through the coil.

That magnetic field that is being transmitted will cause electricity to flow into metal objects that it comes into contact with.

The second coil, the receiver, identifies the difference in the resulted magnetic field  as the

buried metal absorbs it and the electricity begins to flow through it.

When it detect a change, the second coil sends the alert to the control box through the attached cable,

and you hear the signal from the speakers or your headphones.

In pulse induction technology there are one coil only to transmit and receive of magnetic signals.

many hundreds times in seconds which called pulses which transmitted into ground, and the coil also

receive the reflected signal from any buried metal object , the difference in signal converted into a digital signal

in the control box as an alert sound depending on signal strength and properties. 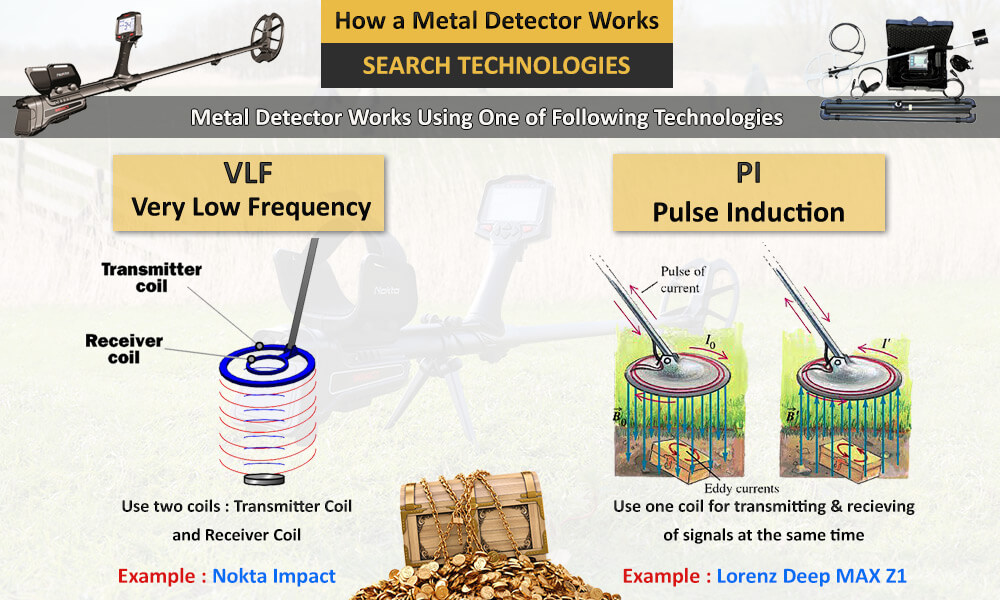 10 thoughts on “How a Metal Detector Works?”